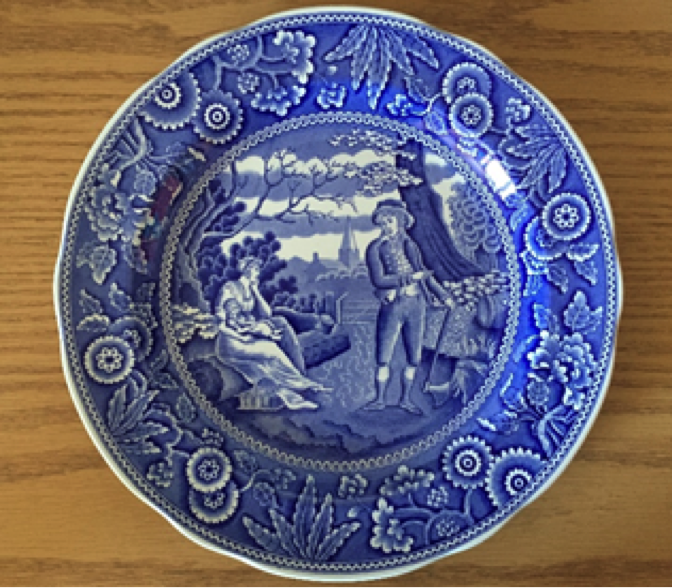 A brief history by Bailey Lawrence and Tyler Farnsworth.

Imitation Delftware: With a diameter of approximately 1 foot, the above plate is colored in the iconic blue-and-white for which “Blue Delft” pottery received its namesake. A romanticized outdoor scene, presumably of a couple and their newborn baby, plays out within an ornate border. Dressed in traditional early nineteenth-century clothing, the characters engage in everyday domestic activities and affirm well-entrenched gender roles. It is unclear where the scene takes place, although it can be assumed that the plate’s British manufacturers meant to emulate a location in England. The skyline of a rustic town can be faintly made out in the background.

After learning about the Dutch’s profound influence on America’s origins and culture, it is astonishing how conspicuous its evidence remains in everyday life. Since returning from the Netherlands, I was capable of admiring the significance and historical texture of the collection of engraved copper pottery that had sat on display in my kitchen for more than a decade. Our brief stint in Delft inspired us to analyze the legacy of the pottery to which the Dutch town lends its name. The plate is a member of a large collection of ornamental kitchenware gifted to my mother by her sister about 12 years ago. This exchange by two Latinas was made with no addition of cultural significance relating to Delftware’s Dutch origins. This particular example of imitation “Delftware” was made in England, where its manufacturers claimed to be harkening back to a collection crafted in 1816. My mother was delighted upon learning about what she perceived to be the authenticity of the object, excitedly remarking “Oh wow, she got me the real thing!”

Ironically enough for Bailey’s mother, her delftware would not truly be “the real thing” unless it was about 200 years older, and from the Netherlands, not England. Oxidized tin ceramics, like that of Delftware, had been used in the middle east as early as the 8th century, and found its way to the Spaniards, English, Dutch, Germans, North Africans and Egyptians over the next 900 years. What is unique about Delftware among other oxidized tin ceramics is its white and blue coloring, and its use of a portrait or landscape, rather than a typical geometric pattern.

What’s even funnier yet is that the original Delftware itself is said to have been created as a knockoff porcelain product from China. Porcelain products from China were sought after, but very fragile and costly to ship. Thus came about the trade of delftware, just as pretty but made domestically. So maybe Bailey’s mother’s delftware dish is an imitation piece twice over. All jokes aside, the delftware is a manifestation of the Golden age Dutch practicality and capitalist ways, while also showcasing their refinement and appreciation for beauty and art.

Oxidized tin ceramics came from 8th century Mesopotamians, which was used by 18th century Dutch to imitate Chinese porcelain. This Chinese imitation that took a style of its own was then imitated by the 19th century English, and now one of the English imitation pieces can be found in Bailey’s home, and likely many other American homes as well. The above map shows the route of the history of Bailey’s mother’s piece.

Below link had no author, or publication date, but contains thorough bibliography of resources to examine