City Tavern was one of the first taverns built in New York, and it became the first City Hall/ State House ever built in Manhattan.  A meeting place for all citizens and meant to accommodate meetings of business and order, it was important to the city and for what the city would eventually become.  It was located on Pearl Street which had been where the city met the river before the expansion of New York, and where fishermen and hunters frequented. 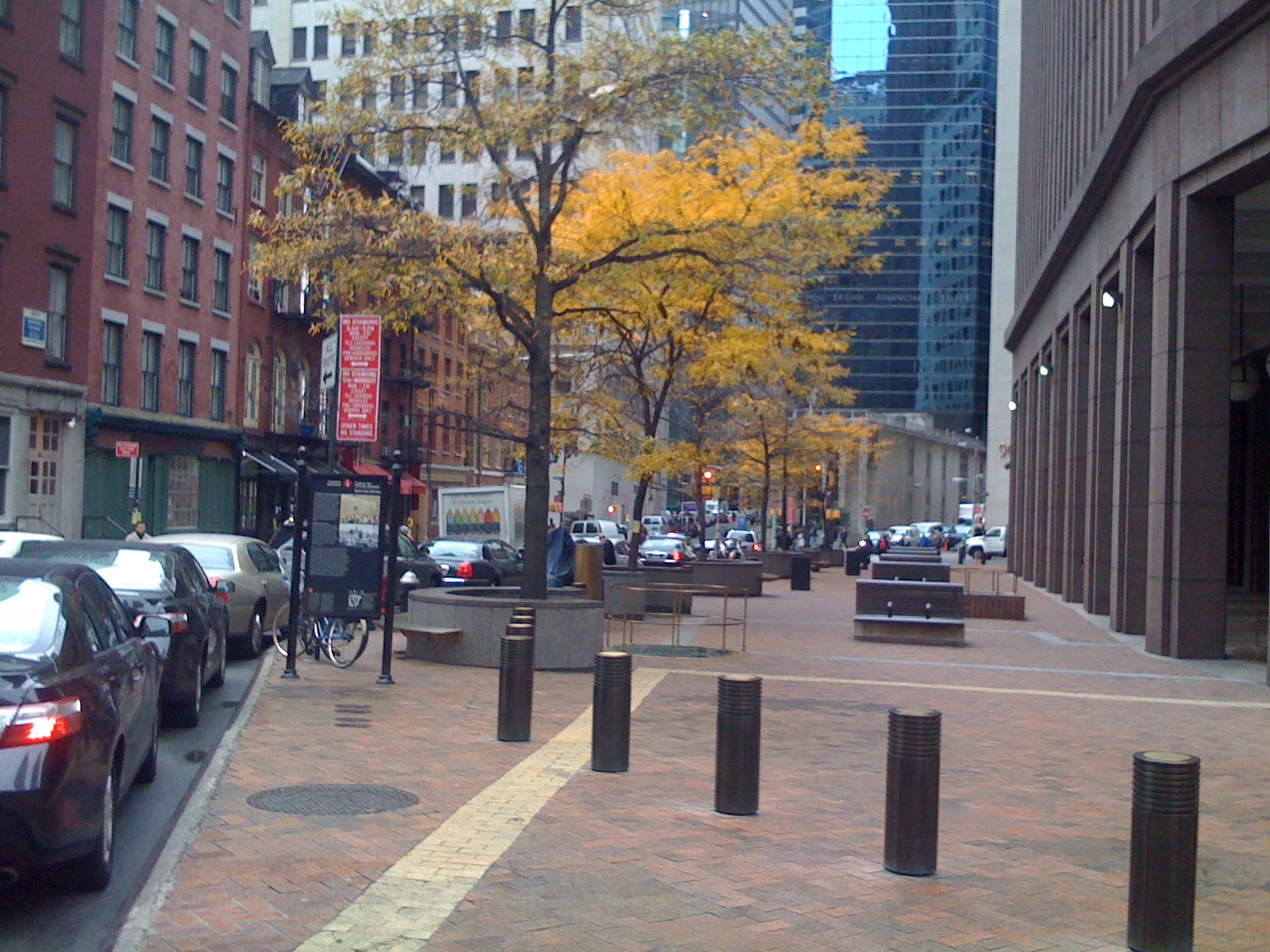 The above image is outside of 85 Broad, in NYC, and the yellow bricks outline the foundation of where City Tavern used to be.

My object was located on the corner of Coenties Slip and Pearl  Street back in the colony of New Amsterdam, and is now the near the street in front of 85 Broad, and Pearl. The governing groups realized they had to be in touch with their citizens and so Director-General William Kieft had a stone tavern built in 1642.  In 1653 it was officially commissioned by Petrus Stuyvesant and named the Stadt Huys (State House), but was known less formally as City Tavern.  It was used as a gathering ground for all people of the city and meetings were often held there.

The first order of business after signing the municipal charter was to declare:

“herewith [to] inform everybody that they shall hold their regular meetings in the house hitherto called the City Tavern, henceforth the City Hall, on Monday mornings from 9 o’clock, to hear there all questions of difference between litigants and decide them the best they can”

The tavern was only about a two-minute walk from the fort, and so the governors often used it as a place to entertain or send their guests when they were hosting.  It was a place for refugees arriving to the city, soldiers stationed there, citizens talking at night, less desirable individuals, as well as the elite who often frequented it.  It was a place where problems were solved and issues raised, where organizers and activists rallied, and where even the Board of Nine was said to have used it for their purposes.  After issues with the British and other historical events, the title of State House was given to the Lovelace Tavern next door in 1697.  But both would eventually be destroyed, with most attributing this to a fire in 1706.  During construction of 85 Broad in Manhattan, the foundations of Lovelace Tavern were found and so the spot of City Tavern was also discovered.  This object was integral to the colony of New Amsterdam and what it would eventually become in the great city of New York.  The artifact tells how the Dutch were organized and prepared and worked to integrate their people, as well as how they met to face problems and make decisions that we see as progressive today.  It still speaks today as its place is outlined in the streets to signify its historical importance in a city that is constantly developing and progressing.  And it was chosen because of the interest brought to it by a source website that was stumbled upon, and after seeing its historical importance and its lesser known status, it had to be given some sort of attention. Located in Orange County, New York, The Bull Stone House is a ten-room stone house that took thirteen years to complete. William Bull and Sarah Wells built the house in 1722; they were among the first settlers in Orange County. The house is extremely durable, and even endured an earthquake in 1728 during its construction. It is one of the oldest intact houses in all of New York, and it has one of only a few hundred surviving Dutch barns of the New World on its property. The house and its accompanying barn are also on the National Register of Historic Places.

After researching, we found that many buildings in New York as well as New Jersey were built by the Dutch. For example, the Bull Stone House, one of the oldest intact houses in all of New York, was built by Dutch settlers. The house was built by married couple, William Bull and Sarah Wells, in 1722. The Bull Stone House is located in Hamptonburgh, New York and has one of only a few hundred surviving Dutch barns in the New World on its property. The stone house which has ten rooms took thirteen years to complete and endured an earthquake in 1728 during its construction.

The house’s builders, Bull and Wells, had received the land which the Bull Stone House is built on as a wedding gift and worked together to build a home and life with each other. Bull was a stonemason and Wells had prior experience with building as she had previously built her own log cabin at the age of 16.

They both worked towards the construction of the house which reflects the more progressive concepts the Dutch adopted towards gender roles. Both husband and wife had active roles during the Bull Stone House’s construction, rather than the societal norm of having only men do the more physically strenuous work.

The house stands as a symbol of feminism by commemorating then eighteen-year-old Sarah Wells’ trek along the Hudson River, during which she courageously led an entourage of Native American guides and carpenters. She received 100 acres as payment for claiming the land; the Bull Stone House that she built with her husband is a physical manifestation of her achievements. The William the Silent statue is approximately 15 feet in height and is installed on a square stone base that is 6 feet in height and weighs abut 2,000 pounds. William is positioned with his right hand raised to his chest and pointing with his index finger. He holds an open scroll in his left hand. A small dog also sits at his feet on his right. He wears the clothes of a civilian magistrate of the 16th century and has a mustache and a beard.

William the Silent is located in the Voorhees mall section of Rutgers University’s College Avenue Campus in New Brunswick, New Jersey. It is located along Seminary Place, where there are several academic buildings. The statue was donated to Rutgers by Dr. Fenton B. Turck to commemorate the university’s Dutch heritage. It was collaborated with Rutgers alumnus Leonor F. Loree. The statue is William I, Prince of Orange who is the early leader of the Dutch revolt against Habsburg Spain which led to the independence of the Netherlands in 1648. For this reason, William is known as the “Father of the Fatherland”.

Our group chose this artifact because we often see it when going to classes in Scott Hall. We were interested in the history behind this statue and wanted to understand its significance in the history of Rutgers. Today, the statue is included in student life in students and community events such as graduation ceremonies, pep rallies, Dutch-American festivals and protests. Initially, students wanted to make the school color orange, in reference to the Price of Orange from Rutgers’ Dutch heritage. However, the Rutgers student publication (later named the Daily Targum), proposed the color scarlet to be the official school color. Many Rutgers students call the statue “Willie the Silent” and “Still Bill”. According the tradition, the statue is expected to whistle when a female virgin walks by.

Occasionally, the statue is a target of vandalism from the ongoing rivalry between Rutgers and Princeton University, since the first intercollegiate football game. Princeton students have frequently doused the statue with orange paint as well as other forms of vandalization.